A collection of 108 Modern Geometric Pattern

1, A collection of 108 Modern Geometric Pattern. Each pattern gets displayed in 3 different styles.

Lily Lu is a true visionary filmmaker, a modern shamanic philosopher of life, formerly Little Swastika, as a tattooist she pushed boundaries with groundbreaking tattooing techniques including the Love Tattoo over 4 backs and then the 3rd Dimension Project the worlds biggest tattoo over 10 backs.

Lily Lu’s previous persona Little Swastika quit tattooing in 2019 to dedicate herself to filmmaking. Her unique tattooing style is known worldwide and it is a progression of the tattoo artform. Her large back pieces, body suits and group projects are notoriously recogniseable in the tattoo world.

Born in 1986, she is an artist from Southern Germany. She spent most of her life as a male and now lives life as a female. Just as she has transformed art and tattooing so she has herself, turning inward to confront her own male ego and blossoming with Love, turning normal societies ideas on their head and defining her own gender.

Lily Lu is a creator, an artist, an independent filmmaker, an author and the builder of her own world. Her filmmaking is powerful and visionary, reflecting her eclectic style that is deeply rooted in Tengen at a place called “Psyland 25” more than a tattoo studio, more like an alternative playground for adults and an empire. She calls this her modern “temple” and it is by far her biggest masterpiece of creative art.

Her vision as a filmmaker is to document the beauty of true alternative lifestyle, to show what is behind the surface, the real raw truth, the beauty and the love within her and others in her world.

Lily Lu has been prolifically producing and conveying her documented vision through short films, small documentaries on her YouTube channels, more kinky films for Dirty Dreaz and aims to breakthrough into feature films in the future.

She has travelled the world and has been heavily influenced by Asian Tibetan art and writing, developing her own sanscrit style called Psyscrit, heavily represented in her art style of tattooing and painting.

She has published multiple art books, a childrens fiction book. She has also been interviewed and published in the international press all over the world.

There are no reviews yet.

Only logged in customers who have purchased this product may leave a review. 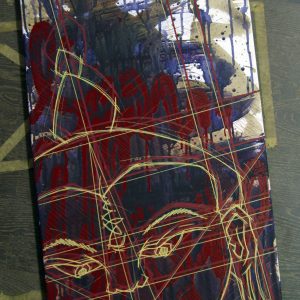 A spit of Green T-Shirt 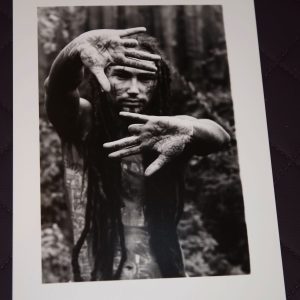 450,00 €
Every print is unique. The photographs are signed, numbered and...
Add to cart 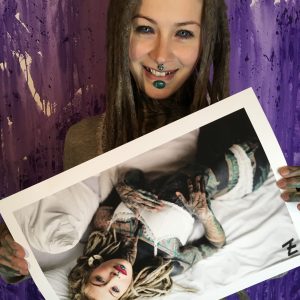 No spam, we promise
[sibwp_form id=2]
Sign in the E-mail list to never miss anything great anymore. We will never spam you with endless promotions and advertising emails. Our newsletter will only be used to inform you about the real highlights around our projects, filmz and merch. Stay insane and informed
Copyright © 2021 websitelama. All rights reserved
Menu

find us on social media